Concert footage, music videos, promotional videos, and behind the scene footage of the
dancers and musicians of Jazz Ain’t Dead®.

Together We Dance December 2016

Had a Blast Teaching in St. Louis again!  These girls worked so hard in their 3-Hour Master Class Workshop.
Thanks so much, Chaz, and Together We Dance!
See you again in the New Year……. 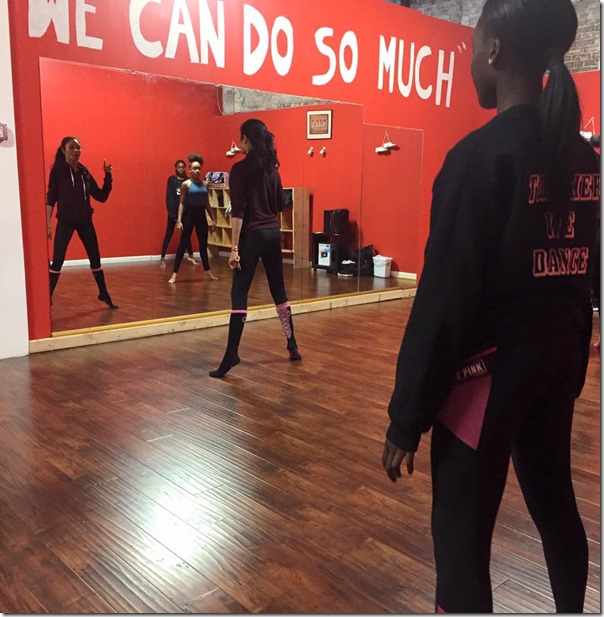 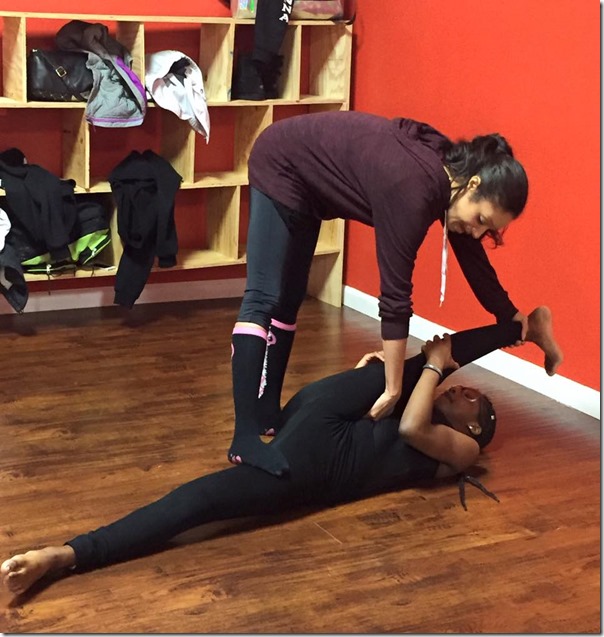 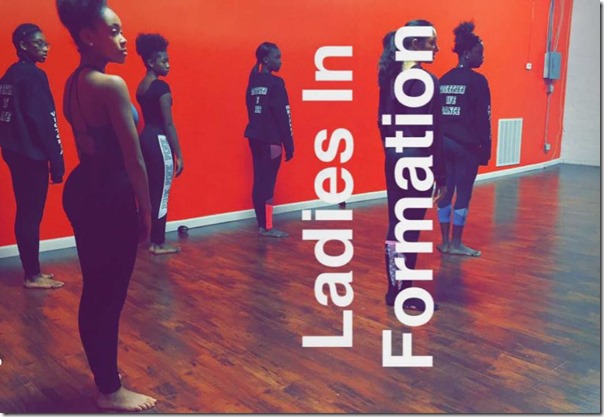 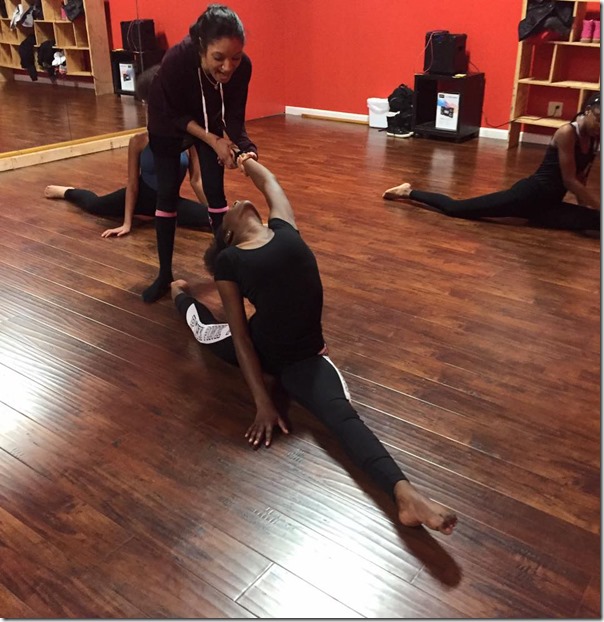 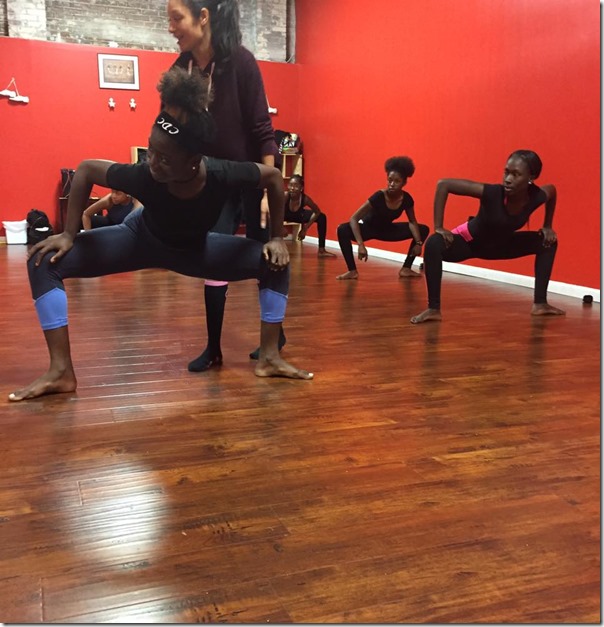 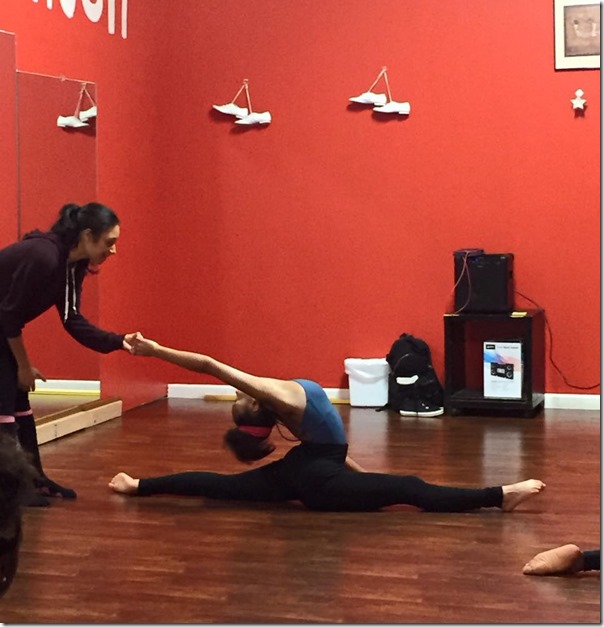 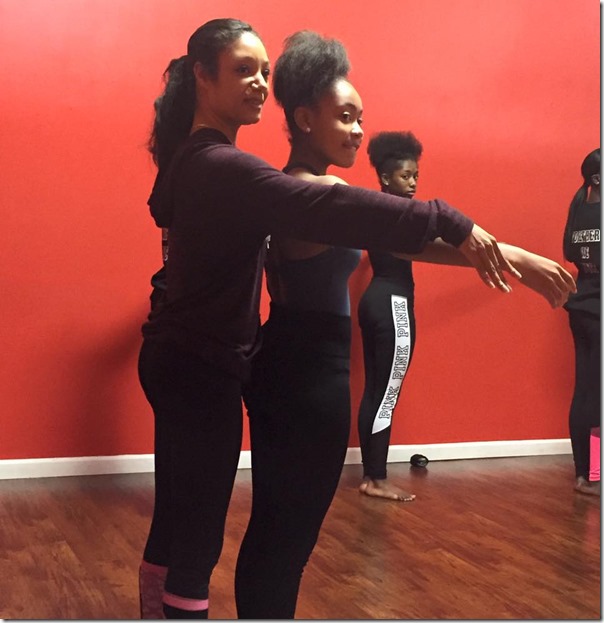 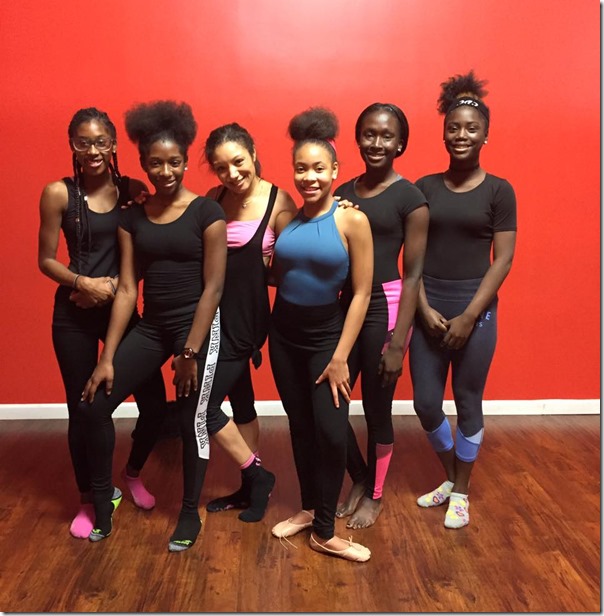 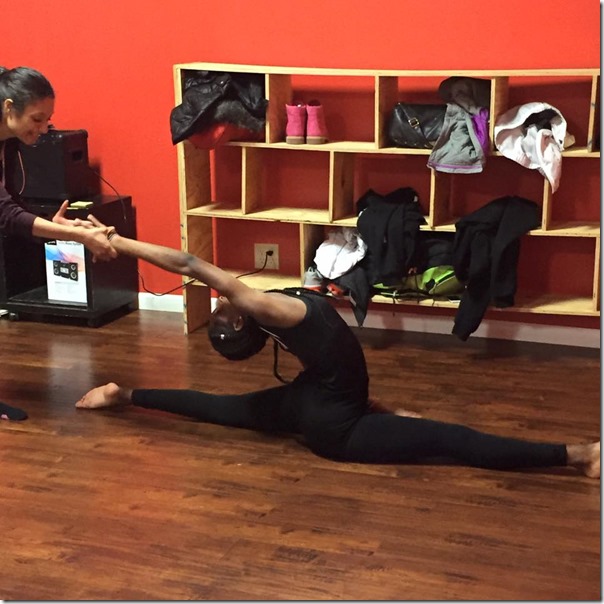 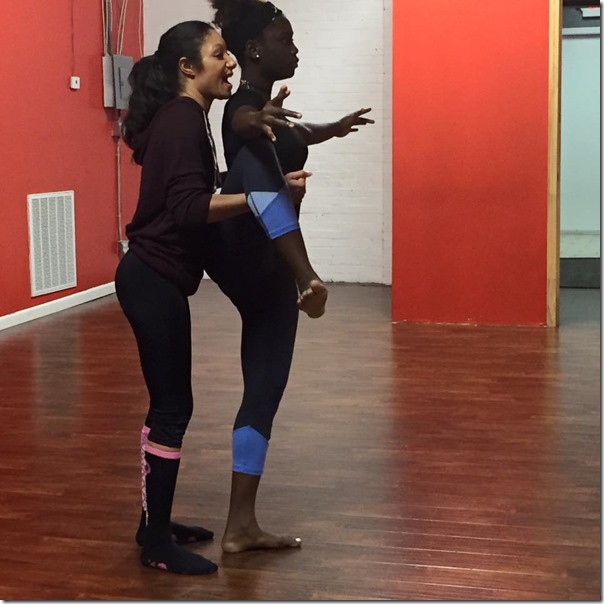 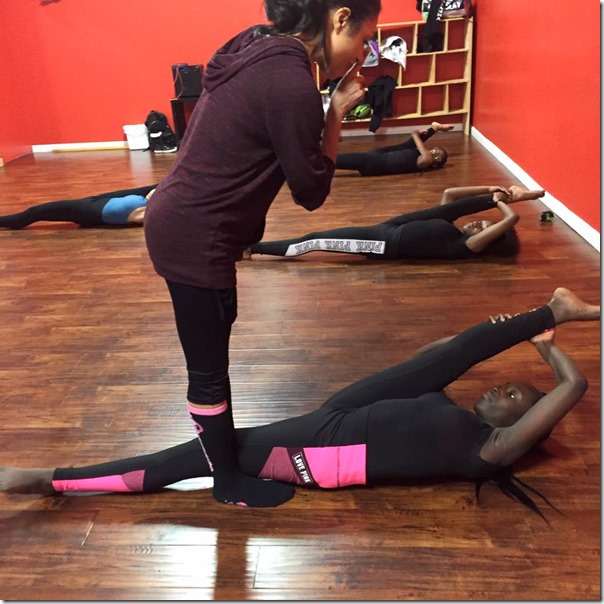 Bankole and Candice Together Again at The Players Club

At the first play reading at the beautiful The Players Club in Gramercy Park in New York City.  In these photos, I’m setting up the backstory for the dance scene in "Painted Virgin!" Shout out to my beautiful dancers, Starr Dee portraying Madonna and Johnny Chatman II portraying Jean Michel Basquiat through the art of movement!!!!  Thank you, Director Bon Bankole, for having me join you on a project again! 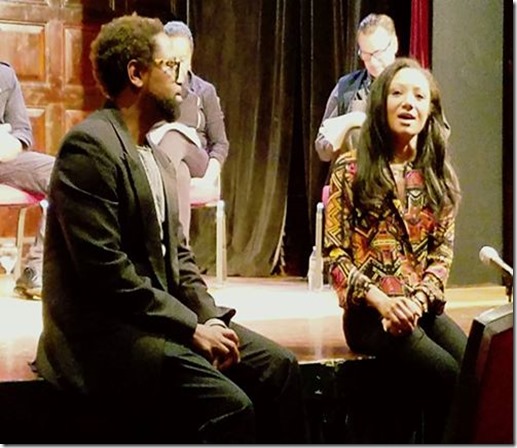 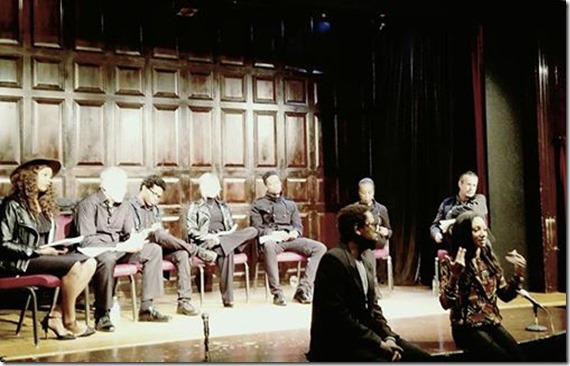 I love this piece!!!
I love my Joffrey Ballet School Students!!!
I love Rajdulari Barnes!!!!
I love Jazz Ain’t Dead®!!!!

My piece I’ve performed many a time over the past few years, and now performing this past summer at the Harlem Arts Festival is my GORGEOUS former student from the Joffrey Ballet School Jazz and Contemporary, Maria Rodriguez, who is now Killing IT with one of my favorite partners and veteran dancer’s of all time of Jazz Ain’t Dead, Gierre Godley.

I love you guys so much.   And, I’m going to miss Rajdulari Barnes singing for me as she goes on to her new adventure in Denver, Colorado.

I LOVE my students at Joffrey Ballet School Jazz and Contemporary Department!
Interlude A Dream Deferred

Fun Day on a Television Series 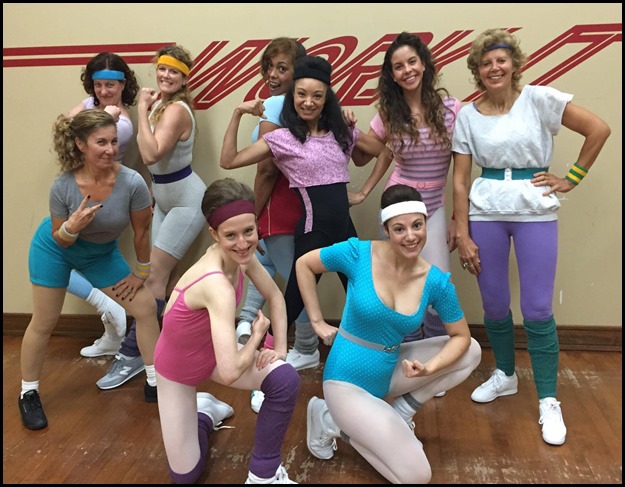 Yay!!!!  We made it into the Harlem Arts Festival Recap Video!

I was honored to open the show again this Summer for the Joffrey Jazz & Contemporary New York Summer Dance Intensive 2016!

I got some help this year from my Jazz Ain’t Dead family.  Big shout out to them…….  Music by Chris Rob and Candice Michelle Franklin.  Vocals by Kenyetta Coffee.  Alto Sax by Rogerst Charles.  Bucket Drums by Osiris.  Everyone was awesome!!!!  Thank you sooooo much……

If you missed it, here's the show we did at Harlem Arts Festival, Saturday, June 25 for Jazz Ain't Dead!  Special thanks to the students of Joffrey Ballet School and all my special guest dancers and musicians.

Joffrey Ballet School Spring Dance Concert 2016
One of my FAVES!!!!

Trying to capture the New York spoken word and jazz scene I saw in the 90’s for the kiddies when I first came to NYC. 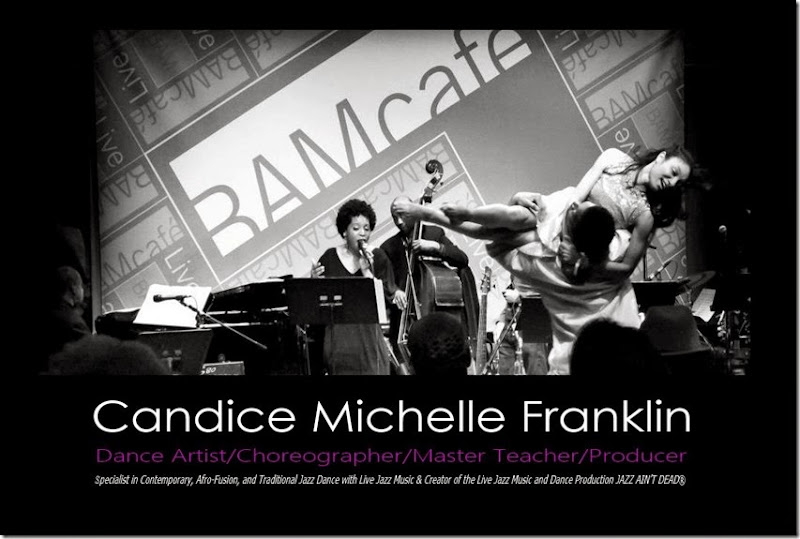 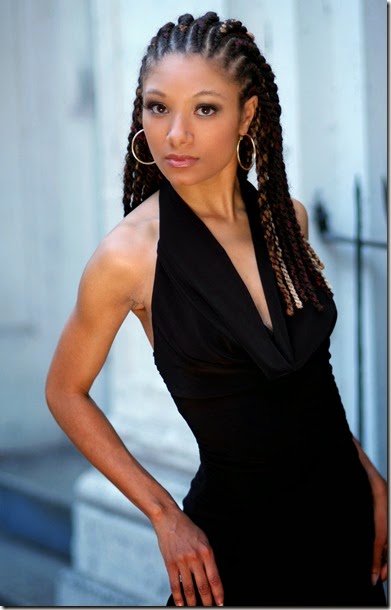 Originally from St. Louis, MO, born and bred into Jazz dance and influenced greatly by the Jazz music scene, Candice Michelle Franklin is a New York based professional dancer, choreographer, and producer who has been seen in numerous film, TV shows, music videos, industrials, and, of course, on the live stage performing in plays and dance companies.  She has a B.A. in Fine Arts majoring in Dance on four-year scholarship, studied on scholarship at Steps on Broadway, trained in St. Louis at Missouri Concert Ballet, and, upon invitation to New York, received her conservatory training at the Alvin Ailey American Dance Center.  She owns Dance Industrial Professionals, Inc./The Pro DANZ Group in which she oversees the dance and creative direction of several performance groups, recording artists, industrials, and stage shows.  Her work has been performed in a host of New York venues including Jacob Javitz Convention Center, The Syracuse OnCenter, Capitale, Odeum Expo Center, Broad Street Ballroom, The Kumble Theater, Symphony Space, Brooklyn Academy of Music's BAM Cafe, Webster Hall, The SPACE at Westbury/Westbury Theater, Stage 48, the Oheka Castle, The Theater of Riverside Church, The Sage Theater, American Theater of Actors, Tribeca Performing Arts Center, and Joyce SoHo, as well as numerous casinos on the east coast such as Turning Stone, the Foxwoods, Mohegan Sun, Trump Plaza Hotel and Casino, Trump Taj Mahal, Tropicana, Borgata, and Caesar’s.

Most recently, her choreography work has been seen in the WEBBY-nominated music video for the rock band Black Taxi called “Shoeshine,” in the holiday stage play, "Coming Home to Christmas," and in the gospel stage play, Blest Be the Tide, performed at Aaron Davis Hall in New York City.  In addition, she is Head Choreographer for CEG Productions LLC, is choreographer for the 80′s Girl Group, Buffalo Stance, and serves as choreographer for a number of recording artists including Natiah, internationally celebrated Bollywood Hip hop artist, SHAKTI, the rapper BRASCO, and Grammy award winning recording artist, Macy Gray.

Currently, she performs with the legendary master jazz pianist Onaje Allan Gumbs II's New Vintage, works as an Advanced Jazz instructor and adjudicator for The Joffrey Ballet School in the Jazz and Contemporary department for their summer intensive and elite professional bound trainee programs, instructs in Joffrey's Master Teacher National tour, and works as the producer and choreographer for Jazz Ain’t Dead®, a live band and dance production group performing at Jazz Festivals and Jazz concert series' such as Jazzmobile, the Harlem Shrines, and the Mid-Atlantic Jazz Festival.  Coming up next year, her production, Jazz Ain't Dead® will be featured as one of the resident performance groups for the upcoming Nashville Jazz Festival slated for the Summer 2015.  Miss Franklin is a proud member of SAG-AFTRA and is represented by DDO Artists New York City.

All Choreography by Candice Michelle Franklin

BBTT Sunday Performance 2016 For All We Know

This is my favorite Prince song ever.  Choreography by Candice Michelle Franklin originally performed for the Prince Tribute show DMSR. directed by Reuben Edwards


Want to Contact Candice Michelle Franklin? Send Me a Message!